The following excerpt is from GET ON: A guide to riding motorcycles for women who think too much. Copyright 2013 Janet H. Green – All Rights Reserved, No Use Without Permission

I have been astounded over the past few years at the number of women venturing into the world of riding motorcycles. When I began riding my own motorcycle in 2002, women made up about nine percent of all bike owners. As of this writing that number is hovering around 19 percent, give-or-take.

Perhaps we’ll find that the first couple decades of the 2000’s marked the height of this “women’s movement,” but that’s really beside the point: with women coming into the hobby in large numbers, they’ve actively sought and found encouragement, information, and tips for “getting started.”

And so here we are, you and I, because somewhere in your mind is the thought: I want to learn to ride a motorcycle.

It’s been tumbling around in your brain for some time, bumping into other more fleeting thoughts like “I want to become an international courier” and “What the hell is ‘twerking’ anyway?” and somehow it has caught on.

Perhaps you haven’t even said it out loud yet. But it’s there, and it’s sticking to one of your neurotransmitters like those God-forsaken little green burrs that cling to your ankle socks when you have to walk across your hillbilly neighbor’s unmowed lawn to retrieve your garden hose, which he borrowed the day he was making a home-built Slip-in-Slide out of garbage bags, which turned out to be a horrible idea because of rocks and his decision not to wear a jock strap.

But I digress. The point is, the thought is there and it won’t go away.

It’s why you’re reading this.

Well here is a bit of a reality check for you: when you do utter that thought out loud – when you actually say to someone, “I want to learn to ride a motorcycle” – there is a 90 percent probability they’re going to hate the idea.

It doesn’t matter if they’re your mother, your son, your boss, or your local Starbucks barista. Unless they already understand the joy of motorcycling, they are almost certainly going to say something like:

“Why in the HELL would you want to do that? My friend’s brother was cut in half when he crashed his bike into a guardrail last summer. Don’t you know motorcycles are dangerous?”

And if you’re like a lot of women, that’s where the quest will end.

Out of fear, shame, embarrassment, or even just hormonally-induced mood swings, you’ll decide they’re right: motorcycles are dangerous, and as the only sex presently capable of grunting hard enough to actually deliver a new human being onto the planet and thereby ensuring the survival of the species, you’ll decide it’s in the best interest of your family and, indeed, all of humanity, to just drop the idea and take up philately instead.

How to Have An Epic Yard Sale is now available! 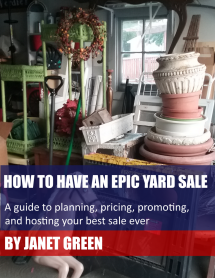 GET ON also available! 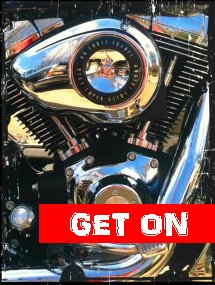